BARBARA and PHOENIX - A review of two movies

As I said in my previous post, my mother always said, “Start out the way you mean to go on.”

I watched the film Barbara on New Year’s Day. I watched Phoenix the day after. It would be wonderful indeed if I could continue my movie watching year with films as visually beautiful and as moral compass-ish as these two. Even if my husband, Derrill, did say, “What?! Subtitles?”

Both movies are directed by Christian Petzold and both star Nina Hoss and Ronald Zehrfeld. Both have gorgeous photography, but each has a different plot and a different feel to it. Both are beyond excellent. 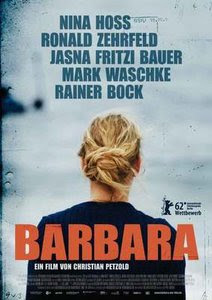 First, Barbara. This movie is set in East Germany in the 1980s. For those of us who lived through the cold war, our news consciousness was shot through with tales of people who had risked everything to escape the iron curtain countries. I remember one family who built a hot air balloon and successfully flew over the Berlin wall. I had a math instructor in college who had come through in a wagonful of cabbages. We forgave him his intense manner and sarcasm because of that.

What I’m trying to say is that I brought something to this film that young moviegoers might not bring, for the pivot point of this film is that Barbara, an East German doctor, is desperate to get out. Her punishment for even filling out an official request to leave is exile to a provincial hospital on the Baltic Sea.

Nina Hoss as Barbara is all angles, competent, and brittle. Ronald Zehrfeld  as fellow doctor André Reiser  is—cuddly isn’t the word I want. Safe? Maybe not safe, but watching him gives you the feeling of a safe harbor on the Baltic Sea.

One of the beauties of Barbara, and there are many, is that it trusts the intelligence of its audience.  We are able to read Barbara’s character and that of her fellow doctor, André Reiser, through their nuanced conversations and body language.

The English subtitles are sometimes hard to make out when they’re set against a light backdrop. I would say it might be a good idea to read through the plot outline on Wikipedia before you begin. It won’t destroy the movie for you, for the way Christian Petzold gets from Barbara’s arrival at the hospital to the scene on the beach when she makes her sacrifice is masterful. Knowing the plot will leave you free to concentrate on the wonderful dialog (even in translation) and the photography.

I must say that that last scene has stayed with me. You don’t need to speak German to understand what Hoss and Zehrfeld say with their eyes. 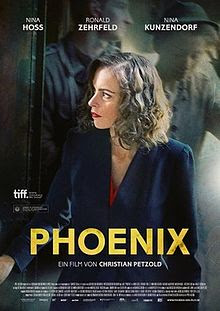 Now to Phoenix. Ah! What a splendid film. I watched it twice in as many days. It was better the second time, because I was able to watch Ronald Zehrfeld, as Johnny,  miss all the important clues because of his tunnel vision, his hell-bent desire for his late wife’s money.

The film is set just after World War II. Nelly returns from the camps wounded in the face and is brought to a hospital by her friend Lene for reconstructive surgery. Nelly is anxious to find her husband, Johnny. Before the war she was a cabaret singer and he was her accompanist. As she goes looking for him, she finds him bussing tables at The Phoenix, a spot frequented by American soldiers.

Though the surgeons tried to recreate how she had looked before, Johnny doesn’t recognize Nelly. However, the surgeons have done well enough that he asks her to impersonate his wife. There is enough of a resemblance that he feels he can train her to pass as Nelly.

Lene warns Nelly that Johnny betrayed her, a Jewess, to the police, and it is because of him that she was arrested and sent to the camps. Nelly refuses to believe it. However, she doesn’t reveal her identity to Johnny but instead goes along with his scheme to present her as his wife so he can get her inheritance, since she alone of her family ‘survived.’

Neither Nina Hoss nor Ronald Zehrfeld  in Phoenix resemble the characters they play in Barbara. Nelly certainly isn’t competent and brittle. She’s broken and desperate. Johnny is desperate, too. He’s not broken, but he’s psychologically and spiritually maimed, perhaps haunted. No safe harbor there.

Both of these are great movies, must see movies. They’re movies you should see with friends and then discuss. They’re grown-up movies. Not because of language or sexual content, but because they deal with serious subjects and themes. But both are absolutely must-see films.
Posted by Liz Adair at 4:01 PM No comments:

Be Kind to Your Tenor Section


I've been a church choir director for several decades now. My success lies in the fact that I don't get overly anxious when people don't come to choir practice.  Maybe someday I'll blog on the tried and true Liz Adair Method of Choir Directing.

But right now I want to talk about the choir I had in Sedro Woolley, Washington. It was a great choir, and some of them even came to practice. I had several children and grandchildren in the congregation, and I leaned on all of them to attend, but there wasn't a tenor among 'em.

Enter Keiffer (Keith) Marino. He was a nice looking young fellow. Gorgeous tenor voice. Came to practice. Boy, we were really cooking when Keiffer was there.

Sadly, he transferred out to better things (he was in the navy). That must have been five years ago. I've gone on to different climes and different choirs, but I heard his voice again yesterday.

My son-in-law sent me a Youtube video of Keiffer singing the national anthem at this year's Holiday Bowl. Take a listen. The caption was, "The way our National Anthem should be sung."