Two Souls are Better Than One by Karen E. Hoover, a Review 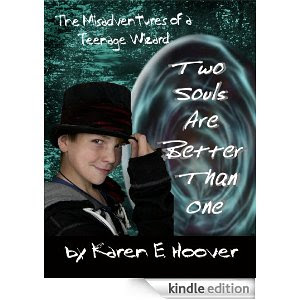 This is a review of Karen E. Hoover's book Two Souls are Better than One, Book one in the Adventures of a Teenage Wizard series. Reading this book was a new experience for me because, for one, I don't read YA Fantasy. Ever. Secondly, this was my first experience reading on a Kindle. I haven't even wanted one. I like the heft of a book in my hand, the tactile feel of paper, even the smell of a book. However, I needed a copy right away, so I borrowed my husband's Kindle and took the plunge.
I found this a positive experience with both the Kindle and the fantasy. It took me a while to get drawn into caring about what was happening to a teenage boy, but when I was hooked, reading became a pleasure rather than a chore.
I won't try to outline the plot, as it's convoluted, twisted, intricate and full of cliffhangers. At the core, it's about the battle between good and evil and about a boy, Jeremy (also known as JJ), rescuing his father who has been taken prisoner in a parallel universe.
What worked for me:
I'll say this for Karen Hoover, she has an inventive mind. JJ no more than saves himself from one tight spot than he is thrust into another.
The title, Two Souls are Better than One (I'll call it TSABTO for convenience) was enegmatic to me at first, but fit the premise of JJ sharing his body with a Mage (singular of Magi). The souls of both are imprisoned in the teenager's body. This premise makes for lots of physical and verbal humor.
TSABTO is written in first person, and Hoover's voice is spot on for a teenager.
What didn't work for me--very nit-picky. Almost insignificant. I hate to even mention them.
First, the flying car incident wasn't explained as to how it was possible. Every other bit of magic or unexpected ability or happening was explained very well, except for how the car happened to take on almost personality and superpowers. I kept waiting for it, because Hoover had done such a good job of making everything else believable--as much as a fantasy can be believable, anyway. But, it's a short passage and the flying car isn't pivotal. Like I said, nit-picky.
The other thing that pulled me out several times was the improper use of the verb "to lie," meaning to recline and the verb "to lay," meaning to place or situate. I'm the lie/lay lady in my critique group, and I'm sensitive when the wrong verb is used. However, it's such a common error that I fear the day may soon come when the words will be used interchangeably, and probably few readers would be pulled out as I, the nit-picky one, was.
This would be a great book to read aloud to kids. I can just picture stopping at the end of a chapter and having everyone moan and beg for just one more chapter so they can find out what happens next. I can visualize that because I was doing the same thing.
Two Souls are Better Than One is available in several e-formats at http://www.smashwords.com/books/view/110865
You can find it in Nook format at Barnes and Noble, as well and for Kindle at Amazon. Wherever you buy the E-book, you'll find it a bargain at less than $3.

For those traditional souls like me who love the tactile feel of a real book, Two Souls are Better than One is available in paper-and-ink format at Amazon.
~~~~~~~~~~~~

And...be sure you don't miss out on the next recipe, review, scrap of wisdom or pithy thought. Become a follower on this blog by clicking on the Join this Site button on the sidebar. Check out my books behind the Liz's Books tab at the top, or read reviews of my latest book under the Reviews tab.
Posted by Liz Adair at 6:28 PM 6 comments:

In God Is Our Trust, Volume 5 of the Free Men and Dreamers Series, a Review 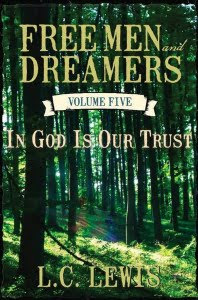 This series chronicles the lives of the Jed Pearson family and friends who live at the Willows Plantation along the Patuxent River in Maryland before and after the War of 1812. As Les Edgerton says, “When the trouble is gone, the story is over.” Given the setting­­—the beginning of the industrial revolution when long distance communication consisted of letters that took weeks to arrive, when medical knowledge was still very basic, and great social inequalities were commonplace—there’s lots of potential for trouble. Factor into that a war with England and the political aftermath, and there’s plenty of action and adventure to move the plot along.


I’ve noticed several things as I read through In God Is Our Trust:

1. L. C. Lewis knows her American and British history and is skillful at weaving it into her narrative. Very seldom does the reader get the feeling that they’ve just been the recipient of a data dump.

2. Ms. Lewis also knows how to put familiar historical facts we’ve always known into a wider context, like showing how the climate reaction to the eruption of Mt. Tambora affected the crops of northeast United States in 1816 and, by extension, how it affected the people we care about.

3. L. C. Lewis manages a full cast of characters handily. The way she does it reminds me of my mother knitting argyle socks, with lots of little bobbins hanging down. If mother neglected to knit in the yarn from a particular bobbin at the proper time, the line would be crooked. L. C. Lewis never misses a bobbin. All her characters’ lines are straight.

4. L. C. Lewis lets us see undercurrents forming that we know will bear fruit later in American History. Of particular interest to me was to see the beginning of the abolitionist movement decades before the Civil War. Also, L. C. Lewis shows us the beginning of the Church of Jesus Christ of Latter-day Saints (Mormon). This was an American phenomenon that had its roots in the time and place that Lewis chronicles with the Pearson family, and it goes on to have a profound influence on American Westward expansion. I remember that unit from when I taught fifth grade.

5. L. C. Lewis does a masterful job of letting us see how events in American history affect the lives of American people of different social strata. Though Jed Pearson, as a landowner and senator, moves in exalted circles when he’s at the capitol, at home in his farmer clothes he works with common people who are his lifelong friends. We get to know and care about both exalted and common.

6. L. C. Lewis’s villains have some redeeming qualities. We see them as the products of the world they live in, and they are believable and true in their villainy from book to book.

I enjoyed the Free Men and Dreamer series and highly recommend it. I particularly enjoyed getting to see how the historical figures were viewed by people of their own time: Dolley Madison, Andrew Jackson, Francis Scott Key, and Joseph Smith, Jr. L. C. Lewis gave me a glimpse of each of these people from a different perspective than my 5th Grade Teacher’s Guide. In God is Our Trust was a nice ending to the series. We saw both Jed and Hannah Pearson as mature, responsible individuals and, though we knew the trouble wasn’t gone yet, we felt confident that they could handle anything that came along.
Posted by Liz Adair at 4:54 PM 2 comments:

Tristi Pinkston, blogger extraodinaire, set up a blog tour for me during the month of December. Rather than give the whole months' worth of stops, I think I'll do it by weeks. That should complicate an already complicated month, but that's just the kind of gal I am.

This is an impressive lineup of bloggers. I've been to each of them and I'm blown away with how articulate and well written all the posts are. These are serious bloggers.

As you check out each of these blogs, I hope you'll sign up to be a follower. And, if you're not already a follower of Liz Sez, I hope you'll click on the 'Join This Site' button on the sidebar.

Heidi Thomas, novelist and Willa Award winner already highlighted Cold River on her blog. You can find it at http://heidiwriter.wordpress.com/2011/11/28/liz-adairs-new-novel-cold-river-a-hot-read/#comment-2876

Mary Trimble, another award winning novelist (she was a Spur finalist, and I have Spur envy, as Counting the Cost was entered in that competition), reviewed Cold River on her blog around Thanksgiving: http://marytrimble.blogspot.com/2011/11/book-review-cold-river.html


Julie Coulter Bellon, author of six romantic suspense novels, was another Thanksgiving reviewer. You can find hers at http://ldswritermom.blogspot.com/2011/11/thanksgiving-book-reviews-cold-river.html

Cami Checketts, another romantic suspense author, is doing a book giveaway on her blog today. Hop over there and sign up! http://camicheckettsbooks.blogspot.com/2011/11/cold-river-book-giveaway.html Cami solved a problem for me. Cold River has been nominated for a Whitney Award, and the process is that the chairman asks the author to declare what genre the book should be judged in as it goes to the committee who will winnow all the nominees down to five finalists. In this case the question was, is Cold River a suspense or romance? I wrote it as a romance, but the description on Amazon makes it sound more like a suspense. Thanks, Cami, for validating my intentions.

Jenny Moore also has a review of Cold River posted on her blog at http://www.shesgotthewritestuff.blogspot.com/2011/12/cold-river.html

On December 2, Lynn Parsons will review Cold River. I'll be interested to see what she has to say, as there's educational stuff--Dyslexia and an inventive way of teaching math--in Cold River. Lynn, in addition to being the co-author of (dis)Abilities and the Gospel: A Guide for Families and Teachers, is an educational diagnostician. Lynn's blog is at http://lynndeniseparsons.blogspot.com/

On December 5, Autumn Weber takes over the review reins at her blog Queen of Chaos. http://www.queenofchaosandjoy.blogspot.com/

There are two reviewers on December 7: Power blogger Rebecca Rodriquez reviews Cold River at http://www.ifonlylifecouldbethatsimple.blogspot.com/
and Lynnea Mortensen posts her review at http://www.lalasbooks.blogspot.com/
Posted by Liz Adair at 11:12 AM 4 comments: