Could You Be an Angel Today? by Christine Thackeray

Mother’s Day is coming on May 9. This year I’m asking for Legos. I bought some on Ebay to have for when the grandkids come over, and I got some awesome pieces, but not enough of the regular blocks.
Now, Legos aren’t terribly sentimental, and they don’t say, ‘You’re an Angel, Mom.” I wouldn’t recommend you assume other gray-haired ladies in your life would like Legos for Mother’s Day just because I’ve put the word out that’s what I want. 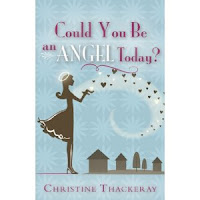 I do have something to suggest that says that, though. It’s a darling little booklet containing a poem by Christine Thackeray about a mom who gets asked to stand in for a guardian angel named Gladys.

The angel in charge of scheduling who asks for help says,
“It’s just for one day. See, I have here a list.”

And then the mom goes on:
I frowned at the thick scroll he held in his fist,
“All right.” I took it. “I’ll do your bidding.”
Then I read the long page and laughed. “Are you kidding?”

But, she takes on the challenge of being a guardian angel, in addition to her other motherly duties. For one day she flies from one need to another, until at the end of the day:

When at last I collapsed in my bed close to one,
Knowing full well that the list was all done,
I expected some trumpets or heavenly choir,
But I was out cold before it could transpire.

Christine Thackeray is mother of seven children and knows all about covering bases while reaching out to others. She has a wonderful sense of the sweetly ridiculous, and it shines through here as she tells how Gladys gets her day off.

Christine sent me a copy, and I was so tickled with it, I figured I’d blog about it.

This booklet is a mere dozen pages, just the right size to tuck in an envelope and send across the country to a mother figure in your life with the note, “This reminds me of you.” Or, go to Amazon and order it and have them send it for you. I guarantee the recipient will smile.
Posted by Liz Adair at 6:44 PM 4 comments:

The New Testament Documents, Are They Reliable? by F. F. Bruce

I love used book stores. I love the idea of people buying used books. It's as if each dog-ear and flex of the spine adds something to the book--not power, necessarily, but maybe a patina of warmth and goodwill because of those who have carried the book, turned its pages, invested their time.


This may seem funny coming from an author who makes no royalties from the sale of used books, but if I had a choice between someone reading my book or buying my book with no intention of reading it, I'd choose to have it read.


I was just about to tell you about this wonderful rabbit-warren of a used book store in Bellingham, Washington. It's called Michael's Books, and I used to go there and wander the mystery and historical fiction aisles while my kids were at piano lessons. I always left time to gravitate back to the Christian book section.

That's where I found a little gem of a book by F. F. Bruce called The New Testament Documents, are they Reliable?


This book was first printed when I was two years old.


Whoa! you say. Did they have printing presses back then?


I chuckle politely and reply that, yes, they did have printing presses in 1943, and that the book has been updated six times since then. Moreover, the book is still in print.


I bought my first copy of this book twenty years ago. Since then I've bought four more. I keep giving my current copy away, and then I have to order a new one.


So, who is F. F. Bruce? He began his scholarly life as a classicist, branching out from this foundation to acquire scholarly expertise on Judaism and Christianity, and especially the New Testament and the world that surrounded it. He held the post of Rylands Professor of Biblical Criticism and Exegesis at University of Manchester, England, and, over his career, wrote more than forty widely-used books about the New Testament. The one I bought at Michael's Books is his first.


The New Testament Documents, Are They Reliable? is written for someone like me. I'm conversant with the New Testament, but I don't know a lot about how it came to exist. Bruce takes us briefly through the formation of the canon and then demonstrates why he believes these documents are reliable from a historical standpoint.


N.T. Wright, who wrote the forward to the edition I used to write this posting, describes what F. F. Bruce shows us:


For a start, the documents themselves--the manuscripts from which our knowledge of the New Testament comes--are in far, far better shape than the manuscripts of any other work from the ancient world, by a very long way. Think of the great classical authors--Homer, Plato, Virgil, Horace, or whoever--and you'll find that our knowledge of them rests on a small number of very late manuscripts, often as much as a thousand years after the author's day. Examine the New Testament, and you'll find that our knowledge of it rests on a very large number of manuscripts, several hundred in fact, which go back as far, in some cases, as the early second century, less than a hundred years after the books were first wirtten. There is better evidence for the New Testament than for any other ancient book.


Bruce's intent isn't to convert. Rather it is to expand the reader's already-held faith. And, he suggests that, prior to reading all his information about the reliability of the New Testament documents, it might be advisable for you to read the New Testament first, if you haven't already done so.


Reading Bruce's book is a treat. It's like spending time with a brilliant but kind uncle who takes the time to explain the wonders of his world to a willing but primer-level student.


The names of the chapters are a window into the book:


Included in Chapter 5 is the Resurrection, the event all Christians celebrate tomorrow as Easter. I really appreciated F. F. Bruce's treatment of it and for this learned man's expression of faith in that world-changing, eternity-changing event.


If you want a scholarly, non-threatening, faith-enforcing book on the New Testament, I recommend this book to you.
~~~~~~~~
And...be sure you don't miss out on the next recipe, review, scrap of wisdom or pithy thought. Become a follower on this blog by clicking on the Join this Site button on the sidebar. Check out my books behind the Liz's Books tab at the top, or read reviews of my latest book under the Reviews tab.