My brother, always the whimsical one, tuned me in to “Talk Like a Pirate Day” shortly after it began in 2002.  (You can read about the beginnings of the day on the official Talk Like a Pirate Day web site at http://www.talklikeapirate.com/piratehome.html ) I always intended to remember and wish him a happy day, but when he’d call me and say, “How arrrrr you, matie?” I’d know I’d missed it again.

However, in the last three years, I’ve had a reminder from one of my colleagues. Here’s how it happened. 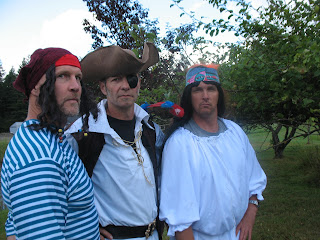 I’ve been working with Ted Ritter for almost ten years now. He’s laser-focused in his scheduling and project management work, but very laid back in most other areas. You could not say that his company has any sort of a corporate feel to it. In fact, he resists even having business cards.

However, when he finally decided that Ritter Project Management, Inc. needed a web site, he also agreed to corporate business cards and brochures. We suggested sending Christmas cards to clients each year, but he opted instead for Talk Like a Pirate Day greetings.

I’m posting the picture that came with this year’s greetings. That's Ted with the eye patch. Andreas Aalhus is in the striped shirt and Jeff Anderson is in the puffy shirt.To see other Talk Like a Pirate Day pics, visit the Ritter web site at http://ritterpm.com/Gallery/PirateGallery.aspx?aid=6

And a happy Talk Like a Pirate Day to you!

Middle School Magic, A Review of Braden Bell's THE KINDLING

A pair of headlights drove around the corner, piercing the darkness. “Okay, there’s my mom,” Melanie said.

As the car turned fully, the lights caught a man standing in the middle of the street halfway down the block. His black cape flapped, while the wind whipped and blew his long hair.

“Mel—look at that guy!” Lexa grabbed Melanie’s arm and shivered as something like a swarm of ants with frozen cleats ran up and down her skin.

The darkness seemed thicker and heavier near him, as if the light from the car was scared to get too close. “Creepy! Where did he come from?” Melanie said as her mother pulled into the driveway. She shivered, too. “Glad we don’t have to wait out here anymore. Bye, Lexa!”

Melanie ran to the minivan, and a moment later, she and her mother drove away.

Lexa turned to go inside her house, but she couldn’t. Some kind of power radiated out from the man, drawing her to him, even though she wanted to look away. He made her spirit feel sick to its stomach, but she was frozen.

Braden Bell is king of the inventive simile and he proves this over and over in his latest book, The Kindling.

The word “kindle’ refers to the process where a teenager who has a dormant, unknown, exceptional power finds out that the power has become active. This story is about three teens, twins Connor and Lexie and their friend Melanie, who ‘kindle’ and are thus marked by the dark powers for extinction. This book is about how they fight on the side of the power of light, along with music teacher, Dr. Timberi, English teacher, Mrs. Grant, and other deceptively familiar people.

Braden Bell is not only king of the original simile, but he also is inventive in crafting his action sequences. One fairly decisive battle takes place in the Small World ride at Disney World. It’s mayhem in the Magic Kingdom.

I don’t read a lot of middle grade books. This book did not convert me to the genre. But I love words, I like the way Braden Bell strings them together, and I’d certainly read another Braden Bell book.

Here’s the website for the book: www.thekindlingbook.com  You can find out more about it there and see some scenes from the book.
I was given a digital copy of this book for the purpose of reviewing it with the understanding that my review would be unbiased. 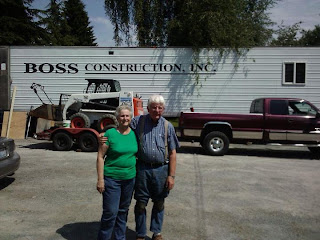 Between my last post and this, we took a vacation to Southern Utah, decided to relocate, put our house on the market, bought a home in Kanab, Utah, and moved. It took a 45-foot van trailer plus a trailer behind the pickup to get everything down here, but we made it. We’re still getting used to blue sky every morning, but I think we’ll manage.


In the midst of stumbling over boxes and trying to find places to put things, my husband, Derrill, joined the local orchestra. He’s a former trombone player, trying to get muscles—both embouchure and slide-operating ones—to remember long-forgotten tensions, and he practices innumerable hours out in his shop.

Kanab has a population of about 4000. It’s not like the small communities in the Pacific Northwest, where they have large populations on 5- and 10-acre plots in surrounding unincorporated areas. Kanab’s surrounding territory is beautifully, ruggedly, colorfully empty. So, 4000 is about what you can count on. That a population of that size would have sustained an orchestra since 1984 is due to the tenacity, drive, and love of music of local pharmacist Kortney Stirland.   The Symphony of the Canyons performs several times a year, one of the performances being at the North Rim of the Grand Canyon. Another is at Peach Days, a local celebration in Hurricane, UT, a small town about an hour away from Kanab. That performance was yesterday. Derrill was sweating it, but felt better when they said there would be another trombonist playing with the orchestra in Hurricane.

I have to digress now and tell you about the Dallas Brass. I meant to blog about the concert we went to last fall where we heard this marvelous group. Their performance model is to go to school districts, give master classes to their middle- and high-school musicians, and have a performance where they play with the students. It’s a win-win-win situation, for the kids, for the Dallas Brass and for the audience.

As I said, the Dallas Brass came to Skagit County and performed, and two of our grandchildren, Vaughn and Kjaisa, got to play with them. The house was packed, and you could tell it was a musical high for the kids. It was for the audience, too. 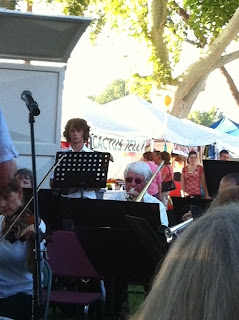 So, fast forward to Peach Days. Derrill prays for a rain-out situation all the way to Hurricane, but though there are rain clouds in the sky, they’re to the west. He has to perform.

The other trombone shows up, and who is it? Only D. J. Barraclough of the Dallas Brass. Derrill says if he had known who the other trombone was going to be, he wouldn’t have had the courage to come. As it was, he enjoyed playing second trombone with the master. 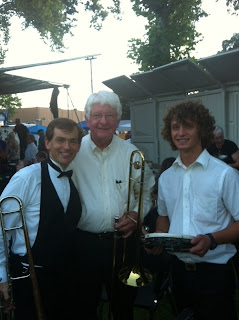 The icing on the cake was that our grandson, Vaughn, a great percussionist, was staying with us this August before heading off to college. The orchestra needed another person in that section, so Vaughn jumped in to help out with the Peach Days performance. So, he got to play with D. J. Barraclough again.

I think the smiles in the picture say it all.