In sending out announcements about the book launch party for Cold River, I included a distant cousin I hadn't contacted on eight or ten years. Bless his heart, he responded, read the book, and we've been corresponding ever since. I sent him a link to SWAN, the charitable foundation I work with, and he told me about the work he does in Africa with Building Solid Foundations. (www.buildingsolidfoundations.org  )
I asked him to write about his experiences as he traveled to africa to drill water wells for remote villages. This organization is a wonderful example of what can happen when just plain people get toether to try to make the world a better place.  The pictures are from the web site. I encourage you to check it out.
Here is Eldred's (aka Ackie) essay:

﻿
I didn't realize how valuable at first, because my eyes glazed over in the beginning chapters. I began to wonder why I had been asked to read it, as it seemed to have been written for the monetarily initiated, people already conversent with financial planning. In fact, John Hauserman states in Chapter 5, "This book is intended for mature readers who have already achieved a reasonable level of financial security and responsibility, and for younger people who are in a wealth building mode." 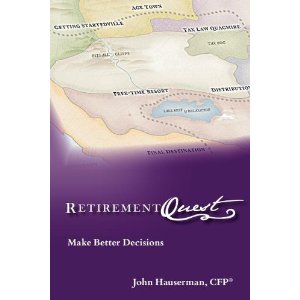 However, my eyes unglazed when I hit Chapter 6, where Hauserman began explaining the basics of financial instruments, how they work, and the strengths and weakenesses of each.  I didn't know, for example, about bonds and coupon rates, and how one of the primary determinants of a bond's coupon rate is the creditworthiness of the bond issuer.  As Hauserman says, "This is a very significant factor, and responsible money management therefore generally dictates that one not necessarily choose the highest-yielding bond." Who knew?
The book is full of lots of sound information. Throughout, Hauserman preaches the gospel of diversification--even in your cash holdings. If you are wondering how you can diversify cash, read the book. He also stresses the need for discipline and regularly rebalancing, which he explains on page 54.

Hauserman points out that younger people need to step up to shoulder the responsibility for their own retirement, for, by law,"once the [Social Security] trust fund is exhausted--it is anticipated that this will happen around the year 2030--the benefit formula is to be rewritten based upon the economics of the program at that time. In simple terms, this means that we shouild expect, if all goes well, that around the year 2030 we will experience a benefit cut of about 50%."
Hauserman also makes the point that this is a way citizens can not only serve themselves but can serve their country, for the republic's economic well being is tied to the economic health of its citizens.  He quotes John F. Kennedy's "Ask not what you can do for your Country" speech in this context.
This book is thoughtful, building on a solid philosophy. The writing is clear, but as I said, for someone like me, or for a young person in 'wealth building mode', I suggest starting at Chapter 6, reading to the end, and then going back to read Chapters 1-5.

You can order the book by clicking here.  John Hausman's web site is at http://retirementquest.com/home.aspx
Posted by Liz Adair at 3:08 PM 3 comments: