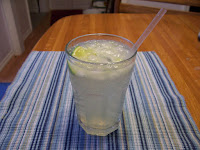 I'm late getting this posted, but I've been, if not at Death's door, then at least in Death's zip code. It kept me from getting this to you on the 28th as promised.
I intended also to have an elegant stemmed glass to show it off in, but we're doing what we can, here. I doubt if anyone would want to drink the pictured glass, refreshing though it may seem, because I coughed all over it.
However, you can make your own.
The non-alcoholic beverage is...(drum roll)..Fresh Limeade!
You will need to purchase:
1. Limes--figure two limes for each guest.
2. Club soda--Figure 8 oz. for each guest.
3. Marischino cherries for garnish
4. Sugar.
Step number 1 is to make the simple syrup. This needs to be made several hours ahead of time so that it can cool in the refrigerator.
The ratio is 2 cups sugar to 1 cup water. (This will be enough simple syrup for about 6 8-oz glasses of limeade. )
Mix the sugar and water together and bring to a boil, stirring until all the sugar is dissolved. Pour into a jar and refrigerate.
Making the Drinks:
When the syrup is cool, squeeze the limes. Mix 1 cup of lime juice to 2 cups of simple syrup, stirring well. You'll have 3 cups of this mix that you can keep in a quart jar or plastic container.
For each drink: In a 12 oz glass, add 1/2 cup of the syrup/lime juice mixture. Add 1/2 to 3/4 cup of club soda. Add ice and gently stir.
Add a slice of lime and marischino cherry for garnish.
Enjoy.
This is a great summer drink as well, but it's suited for New Year's celebrations because the limes are so plump and juicy at this time of year.
~~~~~~~~~~~
Follow this blog. Click on the follow button to make sure you catch the recipes, parenting tips and other information I cast into cyberspace. I miss you if you're not here.
Posted by Liz Adair at 1:57 PM 5 comments:

Merry Christmas to All

Merry Christmas, all you good people! This is my Christmas Card--trying to make up for almost fifty years of non-sending. Do you think it will work? 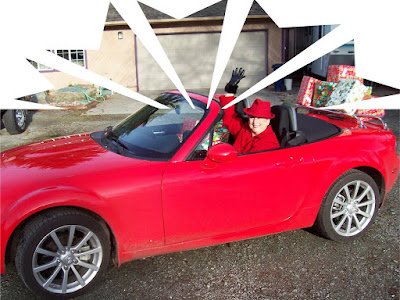 Thanks to all my followers for sticking with me. I've got more recipes, parenting tips and philosophizing that I want to post in the New Year. Starting with a jazzy non-alcoholic New Year toasting beverage that I'll post by the December 28th so you'll have time to prepare. Okay, so I'm sharing that with you in the old year, but who's counting?

May you have love surrounding you tomorrow, Christmas day 2009. I wish you peace and joy in your heart, whatever your circumstances.

As we give gifts to each other this Christmas, I hope we pause to remember the greatest gift of all, given two millenia ago, but planned for before the foundations of the world: the baby, wrapped in swaddling clothes, lying in a manger.

A Matter of Principle - A Christmas Review

A Matter of Principle is one of my favorite Christmas programs. Running about an hour, it first aired on PBS in 1984, and my husband and I still quote lines from it.


Set in what looks to be the early 1960's, it's about Flagg Purdy, a man with a slew of children, high principles and lots of ideas that probably seem old fashioned to those born and raised after women's lib.

Flagg's family is forced to live without electricity because he won't pay certain taxes included in the bill. "I voted agin' 'em," he says. He loves his children and is very invested in their lives, and because his upbringing was hard, he feels that they will benefit from a hard upbringing as well, especially as they see that their father is a man of principle.

Tied up in this is his unwillingness to have a Christmas tree. His father never allowed that frivolity, and he won't have one in his home.

Alan Arkin plays Flagg Purdy and even though we groan at the things he does 'on principle,' we like the man. As his wife says of him, talking about how life wears people down: "Flagg just don't wear smooth."

It's a joy to see the family pull together to show their dad another way to look at his principles and to make it so they have a Christmas tree after all.

You can buy the program in VHS format, in DVD, or pay-to-download from Amazon. The customer comments say they were disappointed in the quality of the DVD.

If you'll click here, you can see a couple of minutes of the movie. If you've got kids from middle grades on up, they'll really enjoy it. It's a great family film.

Follow this blog! I've still got to redeem my promise to give you a wonderful non-alcoholic beverage with which to toast the New Year. And Navajo Tacos are on the horizon as well. And I'll have some more reviews, too.
Posted by Liz Adair at 8:57 PM No comments:

This fudge has been part of my Christmas celebration for over 60 years. My mother made it every year from the time I was a little girl, and I continued the tradition after she died. 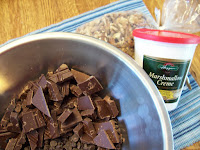 Next, combine the sugar, milk and butter in a large, heavy pot and heat on medium high until it comes to a boil. When the boiling can't be stirred down, turn to medium and start timing, and boil for an additional 4 1/2 minutes

Take off the heat and pour over the chocolate, nut, marshmallow cream mixture. Beat it until everything is mixed together and the candy is losing its sheen.

Pour into a pan somewhere around 10 x 15 inches in size that you've buttered or sprayed with Pam. Or use 2 smaller pans. Or pour into individual, gift-sized pans.

Let cool and then cut into pieces and cover tightly with saran.

~~~~~~~~~~~~~
Tomorrow I'm going to write about one of my favorite Christmas videos--a very off-the-beaten path little story that is wry and funny and heart-tugging and has a you-go-girl ending.

Also, in the wings (and on my camera card), is Navajo Tacos. And, I'll be reviewing some books, too.

And...be sure you don't miss out on the next recipe, review, scrap of wisdom or pithy thought. Become a follower on this blog by clicking on the Join this Site button on the sidebar. Check out my books behind the Liz's Books tab at the top, or read reviews of my latest book under the Reviews tab.
Posted by Liz Adair at 11:32 AM 5 comments:

North and South, the BBC Miniseries; a Review and Christmas Gift Suggestion 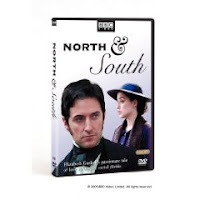 I don’t know how I happened to order the BBC-produced miniseries North and South, but I’m glad I did. I just watched it again the other night and felt I had to blog about it and suggest to any male readers out there who are looking for an idea for a Christmas present for your sweet lady: this is it.

Giver her North and South and then watch it with her. She’ll love you for it and you’ll like it, too. My husband, who judges every movie against The Guns of Navarone, thought it was great.
Taken from a book of the same name written by Elizabeth Gaskell in 1855, North and South is about Margaret Hale, the daughter of an English cleric. Her gentle, south-England existence is changed forever when her father leaves the church because of matters of conscience and moves the family to a northern manufacturing town where he barely scrapes together a living as a teacher.
Margaret has had a London season at the home of her wealthy aunt, and, though she is not totally comfortable with London manners, her social graces cause the northern mill owners’ wives to think her a snob. One mill-owner, John Thornton, falls in love with her.
Margaret’s first introduction to John Thornton is just after she sees him beating up a mill worker. Taking him to task for it, she immediately sets herself apart from the upper-echelon social fabric of the town. The gulf is widened by her south-England ways, and, in her loneliness, she befriends a millworker’s family. It doesn’t help that this worker is a union organizer who precipitates a strike.
In the BBC miniseries, Margaret Hale is played by Daniela Denby-Ashe and John Thornton is played by Richard Armitage. They both do a great job.
When Mr. Thornton was a lad, his father committed suicide because of financial ruin. As he says, “I taught myself self-denial,” in order to pay off his father’s debt and to build up a successful textile mill. When he is around Margaret Hale, he feels very keenly his lack of education and polish.
Margaret Hale struggles to make the best of the situation when life continues to dissolve around her. Part of that struggle is to maintain her independence and to stand for what is right. She finds herself being drawn to Mr. Thornton even as she must do things that set her at odds with him.

There are lots of twists and turns in the plot, some great character studies, and plenty of action. Also, John and Margaret do finally end up together in a beautiful train-station scene.
I would say you need to be prepared to invest eight hours in this 4-hour miniseries, because most of it is in northern dialect, and it takes a while for your ear to become attuned. I love the broad vowel sounds, especially as voiced by Richard Armitage and Sinead Cusak, who plays Thornton’s mother. If you’ll watch it first time through for the story line and next time to catch all the dialogue, I guarantee you’ll enjoy it both times.

You can order North and South from Amazon.
~~~~~~~
And...be sure you don't miss out on the next recipe, review, scrap of wisdom or pithy thought. Become a follower on this blog by clicking on the Join this Site button on the sidebar. Check out my books behind the Liz's Books tab at the top, or read reviews of my latest book under the Reviews tab.
Posted by Liz Adair at 8:42 PM 5 comments: 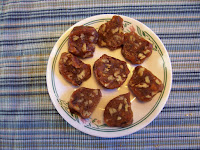 
This is a way easy candy to make. It's one my mother made when I was a child, and I took over the process when I was in the 5th grade.

Put the sugar, milk and butter in a saucepan and heat to boiling, stirring constantly. Lower heat to medium and add dates. 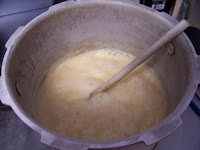 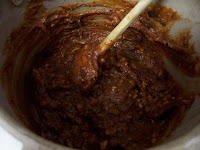 Remove from heat and add nuts, beating until it starts to set up. 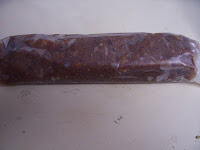 Form in a log on a sheet of waxed paper. Roll up and store in a cool place until it's cool and set.


When ready to serve, unwrap and slice.

This recipe is foolproof. When I was making it for this blog post, I inadvertently added a can of evaporated milk rather than a cup. I simply increased the dates to 2 cups and cooked it longer. It turned out wonderfully. A little more chewy than the original recipe, but great.

And...be sure you don't miss out on the next recipe, review, scrap of wisdom or pithy thought. Become a follower on this blog by clicking on the Join this Site button on the sidebar. Check out my books behind the Liz's Books tab at the top, or read reviews of my latest book under the Reviews tab.
Posted by Liz Adair at 1:42 PM 5 comments: