Lucius Stebbins, in the third book of his Remembering My Life series of poetry (see my previous post introducing these poems), writes of Alaska and Alaskans:

Alaskans seemed to live on dreams
A land it was
Where dreams must never end
For if they did, they'd know
That dreams were all they had to sew
The fabric of their life
Which often was
A strife against the wild. 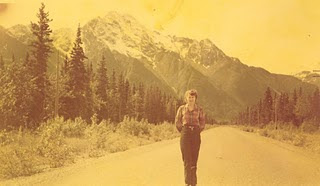 At left is my mother, standing on the highway that went from Palmer to Anchorage, probably in the vicinity of The Butte. We lived on the flank of the mountain behind her.

We lived in Alaska from 1951 to 1956, and it was a magical place to live, but we were cushioned a bit against what Luke Stebbins calls 'the wild,' as we had been brought up by the government to work on a hydroelectric project. There were lots of people there, Lucius's aunt and uncle included, who were homesteading, dealing on a daily basis with the Alaskan wilderness.

Our house was provided by the government, but there were many people who lived there, at that time, who lived in basements--subterranean houses with nothing on top--because it was quick, inexpensive and easy to heat. Later, when they had proved up on the homestead and could afford it, they could build a regular house on top of the basement.

I used to beg my dad to return to Alaska, but he would always remind me that I wasn't the one out trying to start equipment at forty below. Ah, yes. Lucius mentions the road from Anchorage to Fairbanks in the winter:

Five hundred miles the span
Attached by one thin road
In winter narrowed down to snowy tracks
Between two icy banks
That sometimes rose
Ten feet above the cars
How perilous the drive, the wind,
The snow and icy fog
Easy to be lost at fifty five below

Luke writes of other things that I remember, of moose and bear wandering freely. I never met a bear, but we had moose aplenty around. One slept under my bedroom window.

He writes of riding the train to fish or hunt and having the train let him and his party off in the middle of nowhere and pick them up days later--only they were stranded because of a flood that kept the train from running for several days. My dad used to fish and hunt in that manner, but he was never delayed in his return.

Luke Stebbins' poems are treasures to me because they unlock memories, things I haven't thought of for years. I'm reminded of a beautiful land and tough, resilient people that I count myself lucky to have lived among over half a century ago.
Posted by Liz Adair at 8:31 AM 5 comments:

Remembering My Life by Lucius Stebbins 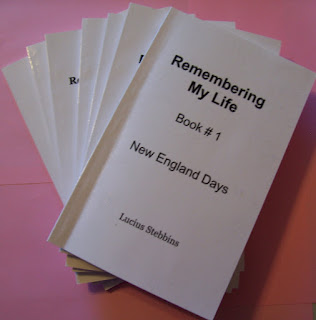 Luke Stebbins moved to Alaska in1956, a couple years before Alaska became a state. Luke came from New England to stay with relatives in the Matanuska Valley. One of his Alaskan cousins was a good friend of mine, and he married another.

Luke’s entry to Alaska coincided with my family’s exit, and I met him for the first time last year. It was great to reunite with his wife, Joan, who had been my classmate in grades five through nine, but it was interesting to talk to Luke, too, and to discover that he is a poet.

This is especially interesting when you understand that Luke, Dr. Lucius Stebbins, one of the founding faculty members of the University of Lethbridge, is a scientist and has published some serious scientific papers. Google his name and you’ll find pdf versions of “Seasonal Variations in Circadian Rhythms of Deer Mice, in Northwestern Canada” and “Some Aspects of Overwintering in the Chipmunk, Eutamias amoenus.” Not much poetry there. I know about his poetry because he very kindly sent me the seven slim volumes entitled Remembering My Life, for he has chosen this literary form to write his personal history.

Because of the Alaska connection, and because he’s telling his life’s story, I expected something Robert Service-ish, something like “The Cremation of Sam McGee,” with a rolling rhythm and standard rhyme scheme. But the poetry of Lucius Stebbins is nothing like that. I find it masculine, visual, evocative, and full of un-preachy nuggets of wisdom. In spare strokes and little vignettes, he shares memories with his reader.

I particularly liked, in Book 1, the story of how his father (whose weakness for drink seemed to hamstring the family financially) helped an adolescent Lucius save loose change to buy the horse he longed for. In his poem “A Kindness For a Horse,” about halfway through, we hear him approach his father and say he’s saved sixty-four dollars, and his father replies:

"I’ve saved a little more,” he said
He showed me where
He’d also hidden all his change
Forty dollars coin within a metal chest
Every day his pocket change
Sequestered when he did not roam
When of a sober mind
How loving he could be.
“A little here, a little there,” he said
“Makes just a little more.”
A twinkle in his eye, I thought
He happier than me.
We drove, just he and I
Miles across the mountain gap
Then down a country road
A place I didn’t know
A valley I had seen
From high upon a mountain top
When forests I would roam
While on a hunt.
The young man in the woods
Eighteen, drafted into war,
So sad to leave
Would sell his spotted horse to me
We counted out our coin
And I could ride him home
I knew the forest trails
To find my way
Instant buddies, he and I
Two creatures of the day.
The kindness of my Father then
Can never be repaid
Though I have tried until his death
When even as his final breath he drew
I tried to pay
Once more to pay
That wondrous debt I owed.
I like to think he knew
How then I learned
Through reckless drunken ways to sift
To find the worth of man
Which always ‘neath the surface lays
If one can understand
Ignore what on the surface may reside
One must look within
Beneath the alcoholic ways
For nature’s plan inside.
Another way he touched me
With his saving act
From then to now
I never spend my coin
I hide it in a tin
Hundreds in a sack becomes
One way I honour him.

Next time I blog I’ll post part of a poem about Luke’s introduction to Alaska that resonated with me.
Posted by Liz Adair at 7:49 PM 3 comments: