Sabotage Cycling Gear is selling water bottles with the Team Rwanda logo on it. For every bottle that is purchased by you and me, a bottle is donated to the Rwandan cycling team. They have trouble covering basic cycling necessities for the team, and water bottles are scavenged and recycled. Click here if you want to help this courageous team with this basic item. Purchase of water bottles also helps fund their trip to  worlds.

How did I, a senior citizen and one who never in her life used pedal clips, come to be involved with the Rwandan cycling team? It’s a great story, and I’ll tell it below, but you can’t read it until you’ve gone to Sabotage Cycling and bought your bottles. Well, maybe you can read on. I’ll put another link at the end.

My son Clay is a passionate cyclist. Last year, as he traveled for his job with the government, he took a Ritchey break-away bicycle with him. After work and on weekends he’d explore the particular country he was in at the time.

He was riding the roads in Rwanda and met up with one of the members of Rwanda’s team. They rode together for a couple of hours, and through hand gestures and rudimentary English, they were able to talk cycling and get acquainted.

Clay told us about the encounter on one of our Skype sessions, and when Christmas came around, remembering the conversation, I got him the movie Rising From Ashes for Christmas. Here’s the blurb from the web site: 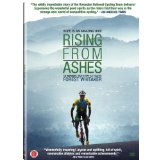 “Rising from Ashes” is a feature length documentary about two worlds colliding when cycling legend Jock Boyer moves to Rwanda, Africa to help a group of struggling genocide survivors pursue their dream of a national team. As they set out against impossible odds both Jock and the team find new purpose as they rise from the ashes of their past.

One of the things you learn from this wonderful, well-done
movie is that bicycles are an integral part of the Rwandan transportation system. In such a poor country, they’re often cobbled together out of materials at hand—usually wood. Just google "wooden bikes in Rwanda" and you'll see what I mean. 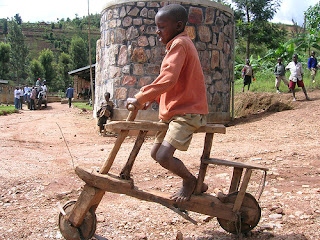 Our whole family was powerfully moved by the movie, and Clay was especially intrigued when he found out that Tom Ritchey (mountain biking pioneer and manufacturer and the “Ritchey” of Clay’s Ritchey bike) was the author of the cycling team resurgence in Rwanda. There’s a great writeup of Tom Ritchey’s connection to Rwanda at the end of his Wikipedia article. 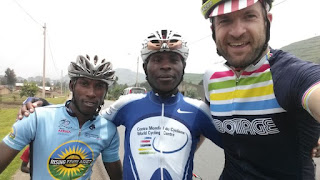 When Clay returned to that country for work after Christmas, he got in touch with Team Rwanda and asked if there was anything they needed him to bring over. He met up with some of them and had some great rides.

In the meantime, Clay and some cycling buddies began designing and selling cycling gear. Their company name is Sabotage, and they’re having a lot of fun and some success with their shoestring enterprise. When Clay heard that Team Rwanda had no water bottle sponsor, it was a logical step to have Sabotage do what they could to supply bottles to Team Rwanda.

So, there you go. If you need some water bottles, or if you’d like to plan ahead for Christmas presents, or just want to foster some goodwill, I hope you’ll go to this link and buy a water bottle or two…or a dozen.

Go Team Rwanda!
Posted by Liz Adair at 10:22 AM No comments:

Of Trombones and Tender Mercies


If I knew fifty years ago what I know now, I would have urged my husband, Derrill, to keep his college trombone and find a group to play with. But the expediencies of food and shelter and a growing family create different priorities when you're young.

We always had music in our home, though. Derrill's college trombone was sold to buy a marimba, and that was sold to buy a string bass that we toted with us through several moves. We found a friend who played guitar, and for a couple of decades we spent many family evenings singing folk songs.

We got seven kids raised and launched, and about the time we had an empty nest, Derrill bought a beater trombone on Ebay. That led to another trombone, which led, finally, to the vintage Bach Stradivarius trombone. It's a model used by many professional musicians, a truly fine instrument.

I know Derrill would like to have been able to play jazz trombone. He has a great ear and a real appreciation for the art form. After he got the Bach trombone he took lessons and spent lots of time woodshedding out in his shop.

He played this horn in the Skagit Concert Band in Mt. Vernon, Washington and for a short time in the Symphony of the Canyons here in Kanab, Utah. But he was frustrated with his inability to pick up where he had left off over fifty years ago.

There was the timing problem, too. As we push on through the middle seventies, we realize we haven't time to learn things that are going to take years of dedication. Life becomes a matter of choices.

In light of that fact, Derrill figured he didn't have time left on this earth to learn to do the Bach horn justice, so he decided to sell it.  He is not trombone-less, as he has another horn that is easier for him to play. Still, advertising the Bach Stradivarius was hard for him to do.

Mike Hettwer, a man in Oregon, bought the horn for his son, Matt, who was studying for his master's degree at California State University at Long Beach. Derrill boxed it up and sent it off, and months later got an email from Mike:

Derrill replied:
What a pleasing message. Thank you. We send our congratulations to your son. It was a great horn to own, but far better that it be in the hands of such a talented musician.
Mike's wife Kami wrote back, saying:
Matt's prize is an Edwards trombone, but he says he will continue to use the Bach exclusively. 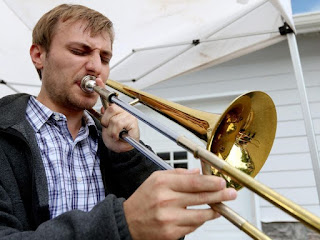 Kami also sent a link to a newspaper article about Matt's win.

So there you have it. Not only is the Carl Fontana Jazz Trombone competition a very big deal, but you can see from the newspaper article that Matt Hettwer is a dedicated jazz trombonist.

So what is the tender mercy? It's a little hard to explain, but here you have a man, a septuagenarian, who now has the time to practice that he didn't have as a young father trying to provide for his family. He's able to buy a nice horn, but in the meantime his body has betrayed him.Seeing the music is harder and remembering the quick passages is trickier, and his arm doesn't work like it used to.

So when he finally realizes that's one dream that's not going to be realized, he sells his nice trombone. He packs it up and sends it off and figures that's the end of it.

But it's not. He finds out that this horn that he spent hours and hours practicing on is now in the hands of a dedicated musician, one who loves jazz and is mastering the craft. One who's won a prestigious award. With Derrill's Bach trombone.

So, though Derrill hasn't yet gained facility as a jazz trombonist (I still hear him out in the shop playing along with  Louis Armstrong CDs), his favorite horn is playing lots of jazz. There's a lot to smile about, there.
Posted by Liz Adair at 3:05 PM 4 comments: