Blog Tour for OH, SAY CAN YOU SEE by L.C.Lews

Before I turn you loose to read about L. C. (Laurie) Lewis's blog tour for her newest from the Free Men and Dreamers Series, I want to write short review.

Reading the List of Fictional Characters in the front of Oh, Say Can you See is like going to a high school reunion and reading the sign-in sheet, because you notice names that you had forgotten and all of a sudden you remember your past interaction with these people and wonder how they're doing.

And then you remember, Jed Pearson wasn't doing so well. When we last saw him, he was a prisoner of war, accused of killing someone under a flag of truce, and on his way to England to answer for this crime. He was also pretty bunged up from tangling with an explosive device as he was trying to defend Washington from the British attack.

Jed, a young man of twenty-five, is head of the family and circle of friends who live at or gravitate to The Wllows, the Pearson plantation. As Jed endures imprisonment and torure aboard ship, he finds a sliver of hope during a hurricane.

At home at the Willows, Jeds family worries about the impending invasion of Baltimore by a British force flush with the success of burning the capitol. Marcus O'Malley is called to accompany Francis Scott Key on a mission to seek the release of Dr. William Beanes, held prisoner by the British. In her inimitable style, Lewis gives us a ring-side seat to a pivotal point in American History, the shelling of Fort McHenry.

If you're like me and have sung "The Star Spangled Banner" hundreds of times, it's great to know more than the two-line explantion of how the poem--quickly set to music--came to be written. In Lewis's hands, what we find out that is that it's written by this friend, because she helps us get to know Francis Scott Key. His name is on the signup sheet at the reunion, too.

Though this book is number four in the series, it can be read as a stand alone book. L. C. Lewis handles all the story lines deftly, and again, she leaves us knowing there are more thorny problems to be solved for these young Americans. We'll be sure to read book five in the series.

So, with that, read on down and see what others have to say about L.C. Lewis's newest book. You can enter to win a necklace by posting a comment about what "The Star Spangled Banner" means to you. 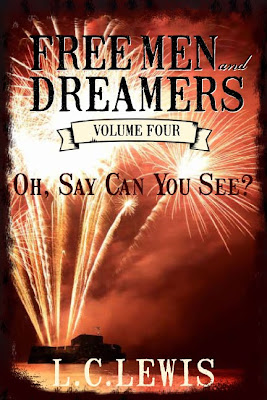 It's blog tour time for
Oh, Say Can You See?
L.C. Lewis
Set against the War of 1812 and the penning of "The Star Spangled Banner," Oh, Say Can You See?, the latest novel in the FREE MEN AND DREAMERS series by L.C. Lewis, brings this often overlooked period to life.

THREE people will win a copy of Oh, Say Can You See? One GRAND PRIZE WINNER will win this beautiful patriotic necklace! 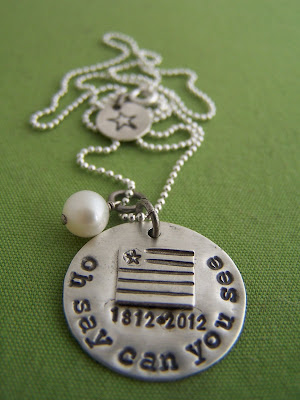 
It's easy to enter.
1. Visit the fabulous reviews and leave a comment letting us know why "The Star Spangled Banner" means so much to you. Remember to include your email address.
2. If you tweet about the blog tour, or post about it on your blog or facebook, leave the link in the comments section and you'll receive an additional entry.

****
Though the capital smolders, the battered Constitution and the presidency have survived. But the British left the struggling government no home. Gone are the symbols of America--the Capitol Building and the President's House, and nearly every relic of the infant nation. Britain's next target is the port city of Baltimore, but has the raid on Washington stiffened the Americans' backs? As the Willows women mourn their absent men - gone to war, or wounded, or captured - they await the birth of a blessed child. Miles away, attorney Francis Scott Key embarks on a diplomatic mission that will leave an everlasting mark on America. Proving that the pen can indeed by more powerful than the sword, Key records the fears and hopes of his embattled people. His epic poem soon set to music and titled "The Star-Spangled Banner," rallies a shattered nation to rise from its knees to claim the dream of "one nation under God" during the closing hours of the War of 1812.
Posted by Liz Adair at 12:03 PM 3 comments:

Postum was introduced as a coffee subsitute in the late 1890's by the maker of Post Cereals. Made of barley and corn, it had a robust taste and full body. During the second world war it became popular as coffee grew scarce. My mother was a coffee drinker, and when she gave it up, she tried Postum, but it wasn't coffee, so she drank hot water instead. I, on the other hand, loved the stuff. On a chilly winter evening, there was nothing better than a hot cup of Postum with sugar and cream in it--a healthy, non-caffeinated beverage.

Post Cereals discontinued Postum in 2007. About a year ago I was lamenting again the fact that you couldn't buy it any more and decided to go on line and see if maybe someone was selling off old stock. I didn't find anyone with a garage full of outdated Postum, but I did find a Postum Lovers site where people were venting about Post's decision and trying to figure out how to coerce this huge corporation to reconsider. I couldn't believe how many people had commented. Literally hundreds had taken the time to post something (pun unintended) on the site.

I was thinking about Postum on a recent chilly day, wondering if I should use up the last few teaspoons from the jar I've had in my cupboard since 2007 (if I can chisel it out, that is). My son Clay is coming home for Christmas, and I thought I'd better save it for him.

And then, this morning, my daughter brought me a Postum subsitute. It's called Inka. Made of rye, barley, beets and chicory root, it tastes very like Postum...though it's been so long since I've had a cup of Postum, the resemblance might not be as close as I think it is. 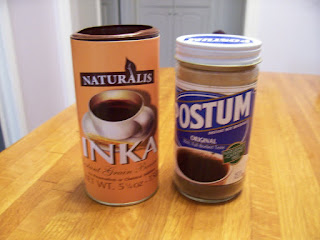 My daughter buys it at the local food co-op. You can also buy it on line.

So, if you're a Postum Lover, and if you happen to be strolling through the aisles of your grocery store and see Inka in its bright orange can, give it a try. I think you'll find it's a pretty good second best.


~~~~~~~
And...be sure you don't miss out on the next recipe, review, scrap of wisdom or pithy thought. Become a follower on this blog by clicking on the Join this Site button on the sidebar. Check out my books behind the Liz's Books tab at the top, or read reviews of my latest book under the Reviews tab.
Posted by Liz Adair at 10:10 PM 3 comments: