You may know Laurie Lewis as L C Lewis, a name under which she writes for her wonderful Free Men and Dreamers series set in the years leading up to and during the War of 1812.

Last year, Laurie took a break from her well-researched portrayal of how this war affected two families and turned her attention to a more personal matter in her most recent book, Awakening Avery.

Laurie usually writes her main characters a few decades younger than she is--lots of us do that, especially those of us who write books with a little romance in them. In Awakening Avery, Laurie Lewis has moved away from that pattern, for her main character is Avery Thompson, a middle-aged, recently widowed lady.

I love how Laurie introduces us to Avery's discovery of the nitty gritty details of a solo existence:

She smashed the television first, though she hadn't intended to. She had fumbled with the remote for ten minutes, trying to figure out how to record an NBC special, and when the TiVo brought up the screen with the list of programs to record--his list filled with westerns and mysteries and classic comedies--she lost it. She hurled the remote across the room, not intending for it to hit the center of the screen, but it did.

I can relate to that. In my house, my husband handles the remote. Laurie goes on:

There was something surprisingly cathartic about the sound. The cracking glass and the sprinkling shards of glass sounded familiar to her, like the inward sounds of her long denied heart, which broke into a thousand pieces every morning when she woke up in an empty bed and went into the bathroom where only one toothbrush hung in the holder.

That's how we meet Avery, still bruised and crippled by her loss. As we spend time with her, we watch her begin to heal, and as she heals, she begins to reach out to others. It's through this reaching out that she finds love a second time around.

Don't get me wrong. This isn't a romance. It's more like a coming-of-age story, but not really like that, either. Maybe you could call it a 'coming-of-middle-age' story. It's a sweet read for a lazy weekend, a good winder-down after a stressfull week.

Leatherwood Press publishes for the LDS market, and though Avery is a member of the Church of Jesus Christ of Latter-day Saints, that is only one side of her character. This book could be read and enjoyed by a member of any faith, because the challenges that Avery meets in her journey are common to us all.

Laurie Lewis changes to L. C. Lewis and returns to early America for her forthcoming book Oh Say Can you See. I'll review it here when it comes out.

Terry and the Bear

Whoever thought up this parenting thing, anyway? Oh sure, children are cute when they're babies, but they grow up to go hiking alone and get attacked by bears. Who needs that kind of worry in her life? 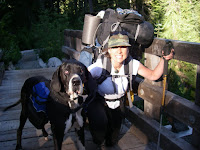 So, my daugher (pictured at left with Chango) has this particular rigorous hike she makes several times a week. Sometimes a neighbor hikes with her, but most often she hikes solo. The exercise, along with the vista from the top of the hill, helps her keep emotional equilibrium.

I have to digress here and explain that, when I wrote Snakewater Affair, Spider Latham came face to face with a cougar, and I found in my research that, with a cougar, you are to make yourself as large as possible--hold your coat over your head--and make lots of noise. Terry remembered that. Unfortunately, that's not what you're supposed to do with bears.

Here is the story in her own words.

It was just me, my Ipod, and my Great Dane, Chango. Willoughby was confessing his true love of Maryanne to Eleanor. I couldn't believe it! They had left that part out of the movie. I was just about to reach the overlook of my five-mile hike at the juciest part of Jane Austin's Sense and Sensibility.

I was drawn away from the story when I heard the dog bark and saw, about 100 yards away, a big black bear. I was surprised but not alarmed. In fact, my emotion was more dissappointment that I wouldn't get to enjoy the view of Skagit Valley from that vantage point, as that was the purpose of the hike. I had seen black bear on hikes before and found them harmless as long as I kept my distance.

As I headed downhill, I heard a scuffle and turned to see Chango running away and the bear charging toward me! I was thinking, "I don't believe this." My eyes saw a cuddly, furry, black teddy bear, but my brain assured me this wasn't going to be pleasant. I tried to make myself look as big as possible and made lots of wild screaming noise, but the bear wasn't deterred. As he got within arm's reach, I walloped him on the head with my Ipod/cell phone case, which sent my phone flying. So much for my chance at 911.

The bear knocked me down and proceeded to claw at me. All the while, I'm thinking, "This is stuff you read about in the newspaper and can't be happening to me." Chango came to my rescue and pulled the bear's attention from me. I was relieved to see the bear running away from me as he chased Chango down the hill. But my relief turned when the bear did, and I found myself again waving my arms, screaming, and trying to look ferocious as the bear tore back up the hill to assault me afresh.

I have always thought Chango a dumb and obnoxious dog, though I love him dearly. But that night he became my hero as he tore up the hill and attacked the bear before she could attack me again. (I figure the bear was a 'she' and was probably protecting her young, so I could not fault her.) 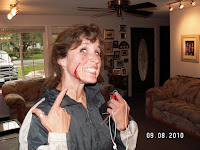 With Chango wrestling the bear, I took that as my cue to run as fast as I could downhill. I fear I must have been quite the sight, becaue I did not leave off the screaming and arm flailing. I am sure I did not look ferocious on retreat. The dog got free from the bear, and the three of us--the bear, Chango, and I--went tearing down the hill.

The bear finally stopped, but I didn't. I ran about halfway down the mountain, and when I was quite sure that I was safe, I went back to Willoughby's confession. 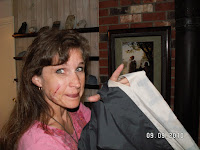 I came away from the incident with claw tears on my jacket that left scratches and bruises on my arm and a scratch on my face not worthy of stitches (I was hoping for an excuse for plastic surgery.)

So I now have steri-strips and a story to tell, but I'm hindered in sharing, as my phone is on the mountain, guarded by a bear.

~~~~~~~~~~
And...be sure you don't miss out on the next recipe, review, scrap of wisdom or pithy thought. Become a follower on this blog by clicking on the Join this Site button on the sidebar. Check out my books behind the Liz's Books tab at the top, or read reviews of my latest book under the Reviews tab.
Posted by Liz Adair at 9:53 AM 46 comments: