For over a decade now, Derrill and I have been buying college courses from The Great Courses, and we spend our lunch hour eating on a tray in front of the TV, learning about history. (We used to watch the lectures in the evening, but we kept falling asleep, so we decided that lunch would keep us awake.) 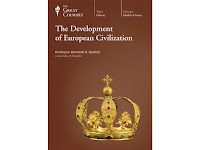 We’ve studied the middle ages (early, high, and late), Alexander the Great, the rise and fall of the Roman Empire, Jewish history, the Reformation—well, the list goes on too long to recount. We’ve gone through some of the courses twice, because there’s so much to absorb.

Right now, we’re on the tail end of the history of Europe from the sixteenth century to the present. It’s taught by Professor Kenneth R. Bartlett, Professor of History and Renaissance Studies at the University of Toronto, and we just got through studying about the rise of fascism in Italy and Germany.
I’m not old enough to remember the rise of the Nazi party, but after the war, I vividly remember pictures in the newspaper and  movie newsreels about what the liberating armies found in the concentration camps.

So, at lunch the other day, as I’m learning about the forces that came into play and about how the Jews were first marginalized, then demonized, and finally exterminated, I was struck by Professor Bartlett’s question: How could a sophisticated people allow this to happen? Why did they not speak out?

There were lots of reasons—good reasons that had to do with preserving your own life and your family’s. But the question is a good one, and I began to ask it of myself. Would I stand up for injustice? Would I speak out if my neighbor—or even a stranger—were being persecuted because of his ethnicity or religion?

Then, boom, in my inbox today comes this email from someone I don’t know but who has my email address. S/he has forwarded an email s/he received from someone else—I think I must have been the third wave of recipients. It was an anti-Muslim email, full of dark innuendo and outrageous statements that would have been laughable if their purpose hadn’t been so ugly.

Anyone who has read TROUBLE AT THE RED PUEBLO has been introduced to (and cares about) my Muslim character Karam. I was able to write Karam because I got to know my son’s former roommate, Hani Almadhoun, a sterling young man and devout Muslim who has dedicated his life to serving refugees.

And anyone who has read LUCY SHOOK’S LETTERS FROM AFGHANISTAN has met Barat, Bairde, Saki, and a host of other Afghan men who worked for my mother between 1965 and 1970. Muslims all, they used to spend time talking with my mother about common ground in their religions. She loved each of them for the good men they were, and because of that, I loved them too.

Back to today’s email: Now, I am not a forwarder, and I’m certainly not confrontational. Usually, I would simply delete an email like this, but here I was with this ‘would I stand up for injustice?’ question still shadowing me.  As much as I wanted to consign this email to the trash bin and go eat something sweet to get the bad taste out of my mouth, I gathered my courage, hit ‘reply all’ and challenged the statements in the email.

I wasn’t eloquent. As soon as I hit ‘send’ I thought of a whole slew of things I should have said. Speaking up to a forwarded email wasn’t as brave as it would have been in Germany in 1935 when the Nuremburg Laws deprived Jews of their citizenship and civil rights, but I don’t think those laws happened in a vacuum. That movement started somewhere, probably with a campaign of half-truths and lies (kind of like this email).