A Mother's View of Rugby

I am forever in awe of grandparents who love to go to their grandkids' games. I have always felt like I paid my dues as a parent. Luckily, I had more musicians than athletes, though sometimes listening to a 5th grade string ensemble play "Twinkle, Twinkle Little Star" is as bad as sitting in the rain watching a second grader who hasn't a clue where the ball is at any particular moment. Both are painful.

But, I did my dutiful duty in both the musical and athletic arena. When Clay finished high school football, I  thought I was done with sitting in the elements, watching my son's potential for injury rise in direct proportion to my inability to understand what had happened on the field. 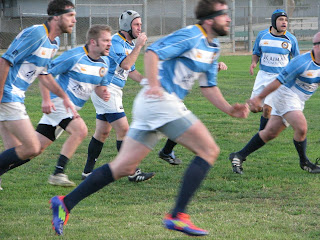 However, last fall Clay enrolled in the Thunderbird School of Global Management and took up rugby. Yesterday we travelled to Flagstaff to watch him play in a tournament.

Now, I'm married to a football enthusiast, and I have tried mightily to understand the game. And I do, somewhat. I understand downs, off-sides, touchbacks, two-point conversions, offense, defense, most of the basic stuff. I also understand that the last two minutes of a game can take forever. It's a really intense game, but in short spurts.

Also, in the aforementioned pile, it's fair for the opposing team to haul people off, toss them to the side, and go after the ball. Having secured it, they take off for their end zone (not called that, I'm sure). 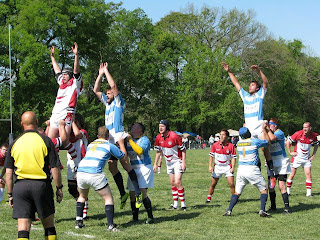 Also, in throwing the ball in, the players grab their forwards by the shorts and hold them up to get greater height. It's pretty awesome to see those guys catch those flung-high balls. 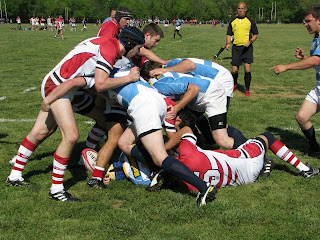 They have a thing called a ruck where one or more players who are on their feet and in contact, close around the ball on the ground. Once a ruck has been formed, players can't use their hands to get the ball. They have to use their feet. I think that's what's happening in the picture to the left. I think.

And the scrum! That's a sight to see.  Well, I'll tell you the sight to see. It's someone who has burns along the sides of their face from the friction of those beside him in the scrum. The scrum is used to restart play after an infraction. What the players do is bend over, one row behind the other--both teams with 2 rows--and push against each other to see who gets the ball. 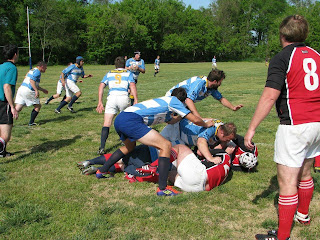 Derrill and I sat on the sidelines yesterday and watched as Clay made a couple of brilliant tackles. Then one time, right in front of us, I watched as he picked a guy up off a pile, tossed him aside, grabbed the ball and ran with it. Was that my sweet little boy? I've added the photo to the left because something like that had just happened, though the ball is back out in play when this pic was taken. 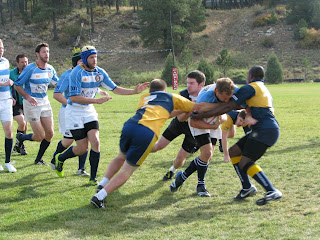 A few players wear what they call scrum caps to help prevent the head abraisions. Other than that, no protective gear is worn in the game, and this is a full contact sport.  I begged Clay to at least wear a scrum cap.  As a poor student, he couldn't afford one. I thought about crocheting him one, but figured he wouldn't wear it, though the're about that substantial. However, he found one in the equipment room and has been wearing it to humor me. He's the one in the front in the blue jersey and lime green shoes.

All in all it was a great day. I was particularly grateful for the two EMTs that were standing beside their parked ambulance during the tournament.

This is a postscript.  Clay just sent me a video of the tourney. He's in the first game. Tall, beard, scrum cap & green shoes--that's him in the middle of the photo above. But, enjoy for the glimpses of the game, though glimpses of Clay are enjoyable too. There's a really good shot of a scrum, and you can see how the players in the scrum have to get the ball out with their feet, and one of the non-scrum guys picks up the ball and runs with it.  With any luck, by clicking here you can see the video.