Counting The Cost Wins the Whitney Award, is Finalist for Others 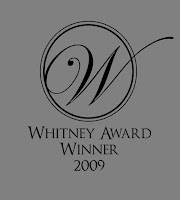 I'm almost a month late making his announcement, but between the time I won the Whitney Award and now, I managed to incubate a virus that took me right down. All I could do was lie in bed clutching my award and sleep. I didn't even want any tomato soup, which is traditional when I'm sick because it's the only thing Derrill knows how to cook.
So, now I'm well, and I'm having a hard time conjuring the walking-on-air feeling I had at the Whitney Awards.
Maybe I'll start by describing the process of selection:
The Whitney Awards were set up five years ago by LDStorymakers, a writers guild composed of published writers, to recognize excellence in literature written by LDS writers, both for the LDS market and for the general market. Books are nominated by the reading public. Simply go to the Whitney site, click on 'nominate' and go through the steps on the page.
Nominations are closed on December 31. Then, a panel of judges--all published writers--reads through the nominations and selects four as finalists in each of the genres.
These finalists are voted on by the Academy. The Academy is composed of LDStorymakers, bookstore owners, other published writers, prominent literary bloggers, and publishers. In order to vote for any book, an Academy member must certify that s/he has read all finalists in that genre. In order to vote for Best Book of the Year, the member must have read all books in all categories.
Awards are presented at a gala at the completion of the two-day Storymakers Writers Conference. 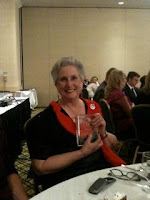 I went to the gala completely relaxed because I had no expectations of winning. I didn't prepare a speech, and enjoyed a delicious meal, listening to Christine Thackeray, Tanya Mills and my son Clay talk about the Middle East. Christine is writing a trilogy with King Herod as the main character, and she's a walking encyclopedia of all things Herod. Fascinating. Did you know he spent his early years at Petra? Clay has been to Petra several times, Tanya camped there with her family as a teenager, and I've seen the Indiana Jones movie that's set at Petra, so we were all interested in the subject.
So then it was time for the awards.

My book was a finalist in the Romance category. One of the reasons I didn't feel I had a prayer of winning was because Counting the Cost, though it's a love story, isn't really a 'romance.' The book doesn't end with a sigh, a kiss, and orange blossoms, so when they read out my name as the winner, I amost dislocated my jaw, it dropped so far.
I hot-footed it to the podium, wondering what I was going to say. I was the first one announced, and I didn't attend last year, so I had no idea what was protocol. I think I dedicated the award to my Uncle Curtis. He's the young cowboy whose life is shadowed in the book. This book is 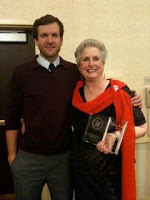 different from all my others. They were carefully plotted, but Counting the Cost was a gift. I feel as if I was given stewardship over the story, that I was chosen to tell it. It's kind of been my quest.


It was great to have my son Clay as my escort for the evening. 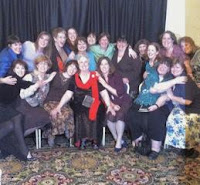 It was also great to have the support of all my ANWA sisters. ANWA stands for American Night Writers Association. It's a writers group made of LDS women, and it's my association with them that has helped me hone my craft to the point that I'd be winning this award. In the picture at the left, we're 'showing the love.' 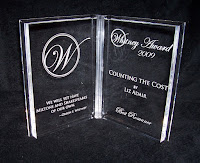 The Whitney award itself is classy. It's in the shape of a book which opens and closes and has the name of the book and what the award is for etched on it. I smile every time I look at it. Who'd a thunk it?
My editor, Cecily Markland, was dealing with family issues and couldn't be at the Whitney Awards, but she held down the fort at the Arizona Publisher Association's 2010 Awards the next weekend. Counting the Cost was a finalist in two categories: Literary Fiction and Regional Fiction. It didn't win either one, but being named finalist is pretty good, too.

Thanks to all who nominated Counting the Cost for a Whitney. I don't know who you all are, but you're fellow questors with me in helping tell the story of the young cowboy, Heck Benham.

Have you missed me? I've missed writing, and I'm back among the living, which means that I've got things I've got to write. I'm going to do healthy fried eggs, an article on face blindness, and I've got a couple of books I've read that I want to review, too. Oh, and a wuuuuunderful video I just saw. So, sign up as a follwer!
Posted by Liz Adair at 7:02 PM 10 comments: